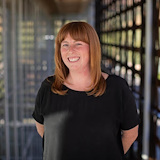 Courtenay Finn is Chief Curator at the Museum of Contemporary Art (moCA) Cleveland since 2018. She was previously curator of the Aspen Art Museum (AAM). Recent curatorial projects at the AAM include group exhibitions A Fragile But Marvelous Life (2015-16) and The Blue of Distance (2015) and British artist Alice Channer's first U.S. Museum solo exhibition Rockfall.

From 2011-2014 she was the curator at Art in General where she commissioned new work by Lisa Oppenheim & Lisa Tan, Letha Wilson, robbinschilds, Katrin Sigurdardottir, and curated Art in General's first International New Commission with Lebanese artist Mounira Al Solh. In 2013 she was the co-curator of North by Northeast, the Latvian Pavilion for the 55th edition of the Venice Biennale.

From 2008–2010 she was the programs manager at Lower East Side Printshop, New York, where she worked in-depth with artists to create new work in printmaking.