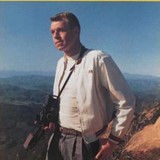 Mel Roberts is an American photographer and activist who captured the spirit of the California Dream that lured thousands of gay men to the Golden State in search of freedom and opportunity after World War II.

Unlike other physique photographers, Roberts’ subjects were not the perfectly proportioned bodybuilders, hustlers, or professional models common in the magazines of the time. His models were natural “everyday” young men who Roberts, first and foremost, had to know personally before photographing. The visual freedom expressed by Roberts, as an openly gay man in a time of oblique censorship, has highly inspired a tolerance for homoerotic portraiture.

Born in Ohio, Mel Roberts was one of the thousands of gay men who migrated to California after World War II. He graduated from USC with a degree in filmmaking. He was comfortable with his sexuality and lived openly as a gay man.

Through the mid and late Fifties, Roberts worked for several Hollywood studios as a cinematographer and director. One of his first jobs after graduating from USC was as a film editor. It was at the news stand at Las Palmas and Hollywood Blvd, up the street from the studio, that he first saw Physique Pictorial and other physique magazines.