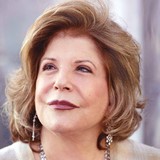 Chairman of the Board, President and CEO, Annenberg Foundation

Since assuming chairmanship of the Annenberg Foundation in 2009, Wallis Annenberg has overseen the distribution of more than $595 million to over 2,181 organizations.

Prior to that, Wallis directed the Los Angeles office of the Foundation in giving nearly half a billion dollars to over 1,000 organizations. Complementing this wide and high impact grantmaking are special projects and initiatives that push the boundaries of traditional philanthropy while serving the Los Angeles community.

The Annenberg Foundation is a family foundation founded by Walter H. Annenberg. Serving as Ambassador to the Court of St. James from 1969 to 1974, Ambassador Annenberg enjoyed a distinguished career as a publisher, broadcaster, diplomat and philanthropist. He was President, and subsequently, Chairman of the Board, of Triangle Publications, which included TV Guide and Seventeen magazine, as well as radio and TV stations nationwide.

Ambassador Annenberg endowed chairs at more than a dozen colleges; and major gifts to support the arts, presidential libraries, hospitals, orchestras, and museums. He and his wife, Leonore Annenberg, were celebrated art patrons whose collection of Impressionist and Post-Impressionist masterpieces was donated to the Metropolitan Museum of Art in New York.

In 1993, the Foundation made a staggering commitment to public education with one of the largest gifts in philanthropic history: the $500 million Annenberg Challenge for School Reform, which worked to revive and inspire public school reform in eighteen sites across the nation. Its funding was spread among cities throughout the U.S. and catalyzed more than $600 million in matching grants. The Annenberg Challenge initiated reform in countless school districts.

Wallis’ commitment to building community space can be seen through the creation of the Annenberg Community Beach House, located on the grounds of the former Marion Davies estate at 415 Pacific Coast Highway; the innovative Universally-Accessible Treehouse project in Torrance, California; and The Wallis Annenberg Center for Performing Arts in the historic Beverly Hills Post Office.

To strengthen the Los Angeles nonprofit community, executive professional development and technical assistance is offered several times a year, free of charge, through Annenberg Alchemy and Project Grantsmanship. In 2009, the Foundation opened the Annenberg Space for Photography, a state-of-the-art photographic print and digital gallery that is open to the public year-round, free of charge.

Wallis is the longest serving trustee at the University of Southern California and has been honored by numerous organizations such as the Americans for the Arts, the Shoah Foundation, and the California African American Museum.

Based in Los Angeles, Wallis is mother of four children and five grandchildren. www.annenberg.org/people/wallis-annenberg/

Member, Board of Trustees, LACMA