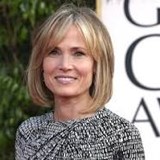 Willow Bay is an American television journalist, editor, author, and former model. In 2017, she became Dean of the USC Annenberg School for Communication and Journalism, having earlier served as director of USC Annenberg School of Journalism. She was previously a Senior Editor for the Huffington Post, and a Special Correspondent for Bloomberg Television.

Bay is married to Bob Iger, the current Chairman and CEO of The Walt Disney Company, since 1995. This is Iger's second marriage. The couple is worth approximately $100 million. They're philanthropy is done thru their more recently established Iger Bay Foundation.