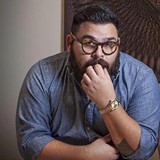 Evan Garza is Director of Public Art at Rice University since 2016 where he oversees the programming and preservation of public artworks and all public art initiatives on the Rice University campus, including "Twilight Epiphany," the James Turrell Skyspace at the Suzanne Deal Booth Centennial Pavilion.

Prior to this, Garza served as Assistant Curator of Modern and Contemporary Art at The Blanton Museum of Art at The University of Texas at Austin from 2014 to 2016. He is co-founder of the nonprofit Fire Island Artist Residency (FIAR), the first residency program in the United States exclusively for LGBTQ artists, where he served as Assistant Director from 2011 to 2014.

Garza has curated exhibitions such as “PAINT THINGS: beyond the stretcher”, co-curated with Dina Deitsch at the deCordova Sculpture Park and Museum (2013), a survey of sculptural and performative forms of painting; “william cordova: this one’s 4U” at the Boston Center for the Arts (2012); and “Something Along Those Lines” at The School of the Museum of Fine Arts, Boston, a curatorial response to the first Sol LeWitt wall drawing in Boston, including works by Adel Abdessemed, Carlos Cruz-Diez, Gego, Felix Gonzalez-Torres, Sol LeWitt, Bruce Nauman, Fred Sandback, Carlson/Strom, and Lawrence Weiner.

He has been published in Artforum.com, Hyperallergic, Art Papers, and Flash Art. He has spoken about art at Harvard University, MIT, ICA/Boston, The Museum of Fine Arts, Boston, Cornell University, UWM–Milwaukee, et al. In 2013, he was selected to represent the United States as the inaugural curatorial research fellow for Hablar en Arte, Madrid. In 2014, Garza was appointed Commissioner for the Boston Art Commission for distinguished service to the arts.