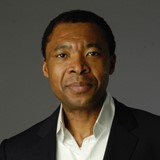 Okwui Enwezor (pronounced Oak-WAY en-WEH-zore), stepped down from as Artistic Director of the Haus der Kunst in Munich in June of 2018 due to health reasons, a role he had been in since 2011. Less than a year later, Okwui passed away from cancer in the spring of 2019.

Okwui "emerged as perhaps the most influential curator of the last quarter-century through large-scale exhibitions that assessed art at a global scale. He first made his mark in Germany in 2002 as curator of Documenta [11], the once-every-five-year mega-exhibition in Kassel. As the first non-European to direct that show, [Okwui] presented a panorama of world art that displaced Europe from its traditional central position, and interwove African, Asian and Latin American art into a cosmopolitan tapestry." www.nytimes.com/2018/06/04/arts/design/okwui-enwe…

He was curator of the Venice Biennale 2015, making him the first African-born curator in the exhibition's 120-year history. He has served as adjunct curator of the International Center of Photography (ICP) in New York City, and as the Joanne Cassulo Fellow at the Whitney Museum of American Art, New York City.

Okwui has also served as Artistic Director of the 2nd Johannesburg Biennale (1996–97), the Bienal Internacional de Arte Contemporaneo de Sevilla in Seville, Spain (2006), the 7th Gwangju Biennale in South Korea (2008), the Triennale d’Art Contemporain of Paris at the Palais de Tokyo (2012), and co-curator of the Echigo-Tsumari Sculpture Biennale in Japan; as well as Cinco Continente: Biennale of Painting in Mexico City.