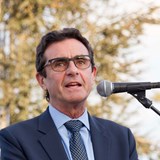 A Bay Area native, Neal Benezra became the director of the San Francisco Museum of Modern Art (SFMOMA) in 2002. Under his leadership, SFMOMA has enjoyed a period of unprecedented growth in its collections; has initiated pioneering partnerships with artists, collectors, and cultural institutions on the local, national, and international levels; and has significantly increased and strengthened its staff. Benezra spearheaded the project to transform SFMOMA through a physical expansion of the museum, designed by Snøhetta, and an extensive enhancement of SFMOMA’s programs, collections, and education services.

Benezra oversaw an ambitious collections campaign — the Campaign for Art — that garnered nearly three thousand works by artists including Francis Bacon, Joseph Beuys, Yves Klein, Agnes Martin, Jackson Pollock, David Smith, and many others. He took an innovative approach to the museum’s nearly three-year closure for construction by launching an extensive off-site programming initiative — SFMOMA On the Go — featuring exhibitions, public art installations, and educational programs developed with cultural partners throughout the Bay Area and beyond.

Benezra’s collaborative approach led to a groundbreaking partnership with Doris and Donald Fisher, whose renowned collection is now housed at SFMOMA. Benezra has also championed deeper relationships with artists, as illustrated by efforts including an increased number of seats on the Board of Trustees for artists (such as current appointees Vincent Fecteau and Jeff Wall); the provision of free lifetime memberships to some three thousand artists whose work is represented in the collection; and the inauguration of the Artist Initiative, supported by a $1.75 million grant from the Andrew W. Mellon Foundation, to bring artists’ voices to the center of conservation and collections work.

Benezra formerly served as deputy director and Frances and Thomas Dittmer Curator of Modern and Contemporary Art at the Art Institute of Chicago, a dual position he assumed in 2000. Previously, he spent eight years at the Hirshhorn Museum and Sculpture Garden of the Smithsonian Institution in Washington, DC, where he was assistant director for art and public programs (1996–99) and chief curator (1991–96). From 1985 to 1991, Benezra was a curator in the department of twentieth-century painting and sculpture at the Art Institute of Chicago. He was a curator at the Des Moines Art Center from 1983 to 1985, and before that served as one of the first coordinators of the Anderson Collection in the Bay Area.

Throughout his career, Benezra has served on professional panels and advisory committees, including the Pew Fellowships in the Arts; the National Endowment for the Arts; the National Endowment for the Humanities; the Art Advisory Panel of the Internal Revenue Service; the Smithsonian Institution Council; the International Advisory Committee for the 21st Century Museum in Kanazawa, Japan; and CIMAM (Comité international pour les musées et les collections d’art modern). He currently serves on the acquisition committee for the Guggenheim Abu Dhabi and the advisory board of Istanbul Modern.