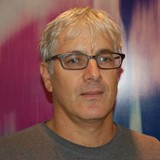 Josh Baer plays different roles in the art world today as an art market journalist and art advisor. He began his career in 1979 as director of the highly influential space, White Columns in New York City.

During this time Josh co-published the art and culture magazine, ZG and co-founded the post-Punk record label Neutral Records which released the first EP of Sonic Youth as well as Confusion is Sex. ZG Magazine featured writings by artists such as Ed Ruscha, Jeff Koons, Vito Acconci, Jack Goldstein, Gordon Matta-Clark, Robert Mapplethorpe, and Ashley Bickerton. Mr Baer went on to represent some of these artists when he opened the Josh Baer Gallery gallery in 1985 which remained in business until 1994, when Mr Baer switched to private art advising, teaching and writing and began publishing The Baer Faxt. He also started teaching arts-administration at The Fashion Institute of Technology and later became a bi-weekly contributor to New York Magazine. Mr Baer has more recently curated selling exhibitions at both galleries and auction houses, and consulted with eBay before the launch of its online art venture in 2014.

Josh is the son of the artist Jo Baer. He served as a consultant to eBay for its launch of its new art and design categories called the eBay Collective.