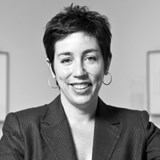 At SFMOMA she has organized a number of major exhibitions, including Brought to Light: Photography and the Invisible, 1840–1900 (2008), which explored the use of photography in nineteenth-century science, and the traveling retrospective, Francesca Woodman (2011). Since 2003, Keller has overseen Picturing Modernity, SFMOMA’s ongoing presentation of its photography collection, and a large-scale collection installation, About Time, for the museum’s re-opening in 2016. In addition to authoring several SFMOMA publications, Keller has contributed essays on Eadweard Muybridge, Carleton Watkins, and Jay DeFeo.

In 2010 she conceived the SFMOMA symposium “Is Photography Over?” and participated as a panelist. Photography has almost always been in crisis. In the beginning, the terms of this crisis were cast as dichotomies: is photography science or art? Nature or technology? Representation or truth? This questioning has intensified and become more complicated over the intervening years. At times, the issues have required a profound rethinking of what photography is, does, and means. This is one of those times. Given the nature of contemporary art practice, the condition of visual culture, the advent of new technologies, and many other factors, what is at stake today in seeing something as a photograph? What is the value of continuing to speak of photography as a specific practice or discipline? Is photography over?

She is working on the first survey of the 19th-century photographer J.B. Greene, and is co-organizing an exhibition on Man Ray.

Previously, Corey held curatorial positions at the Museum of Modern Art, New York (Curatorial Assistant, Photography), and the Whitney Museum of American Art (Senior Curatorial Assistant). She received her A.M. in art history from Stanford, where she was a doctoral candidate (ABD), and holds a BA in American Studies from Yale. www.curatorialleadership.org/fellows/corey-keller/