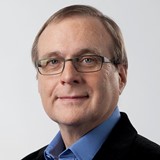 Co-founder of Microsoft with Bill Gates in Albuquerque, New Mexico in 1975, Paul Allen is a major investor, philanthropist and art collector.

Before he died in 2018, Forbes considered him to be the 44th-richest person in the world with an estimated net worth of $20.2 billion. www.forbes.com/profile/paul-allen/#247e2e4d4417

Paul owned the Portland Trail Blazers for 29 years. The National Basketball Association franchise went to the NBA Finals just one season after he acquired it, and then again two years later .

He is co-founder (with his sister Jody Allen) and chairman of Vulcan Inc., which oversees his philanthropic and business interests, owns the 2014 Super Bowl Champion Seattle Seahawks of the National Football League, and part of the ownership group for the Seattle Sounders FC, Seattle’s Major League Soccer team.

During his lifetime, Paul gave away approximately $2 billion and tackled some of the world’s biggest challenges and pushed the boundaries of what is possible. Through his for-profit and philanthropic investments, he sparked important developments and innovations in science, technology, space, education, conservation, community and the arts.

In recognition of Paul's broad philanthropy, as well as his leadership in fighting the 2014 Ebola epidemic in West Africa, the Carnegie Corporation awarded him its prestigious Carnegie Medal of Philanthropy in 2015.

Paul was also a significant art collector which was revealed over the years as he loaned works to museums from his collection, such as a Mark Rothko (valued at $80 million in 2012) as well as other works by Alexander Calder, Paul Gauguin, David Hockney, Dennis Hopper, Claude Monet, Pierre-August Renoir, Ed Ruscha, and Georges Seurat. His passion for art led to his founding of the Seattle Art Fair in 2015 via Vulcan Arts + Entertainment and Art Market Productions.

He was also a voracious pop-culture collector and started the EMP Museum in Seattle to showcase some of the music memorabilia he collected over the years. goo.gl/K4FnDg