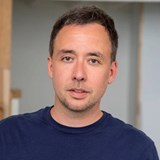 Owen Kydd draws on his joint degree in film and studio art by making films that he calls “durational photographs. Typically, loops of long, uninterrupted shots of scenes in which there is little movement—what Kydd calls the investigation of a moment—he works around themes of change and resistance found frequently in urban and quotidian life.

He made a series of work based on marginalized city neighborhoods in the United States’ West Coast, by filming such subjects as storefronts, streets, and local inhabitants. Even though the films were made as individual works, he often presents them simultaneously on multichannel screens in exhibitions.

Kydd once worked as one of Jeff Wall’s studio assistants, and his former mentor remains influential in his practice. www.artsy.net/artist/owen-kydd

Kydd received his Bachelor’s degree in film and art from Simon Fraser University in Burnaby, British Columbia, and a Master’s degree from UCLA. His work has been widely exhibited at the Vancouver Art Gallery in British Columbia, Metropolitan Museum of Art, Los Angeles County Museum of Art, Art Gallery of Western Australia in Perth, Foam Fotografiemuseum Amsterdam, San Francisco Museum of Modern Art, and the Daegu Photo Biennale in Korea.