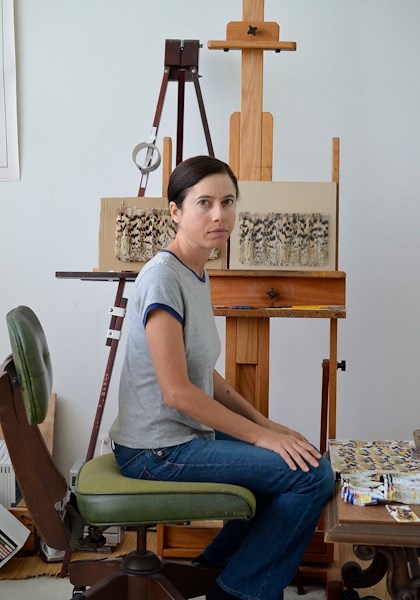 Born in Buenos Aires, Argentina in 1972, Victoria Gitman immigrated to the United States in 1987. In 1996, she graduated from Florida International University with a BFA in painting.

The artist's recent work focuses on life-sized “portraits” of fur purses and a series of diminutive drawings based on compositions by the Old Masters. Her purse “portraits” are set against shallow, neutral-colored backgrounds. Each of the fur purses is meticulously rendered from close, direct observation. Gitman paints in oils, hair by hair, creating surfaces that are soft and seductive, yet austere in their precision. Many of the paintings feature abstract patterns reminiscent of early and mid-twentieth century painterly traditions. Evoking modernist compositional techniques, Victoria's paintings are resolutely frontal, their imagery extending nearly edge-to-edge. A number of the paintings reinforce this subtle formal dialogue by incorporating veiled references to canonical artists like Kazimir Malevich and Mark Rothko.

As in her paintings, Victoria's drawings also play on themes of ocular perception. Her tightly cropped figures hover on the surface of the picture plane and feel almost within the viewer's reach. The chosen medium, graphite on Mylar, lends her images additional ephemerality with its inherent translucent property. Fleeting and fragile, Victoria's drawings invite the immediacy of an intimate conversation with the viewer.