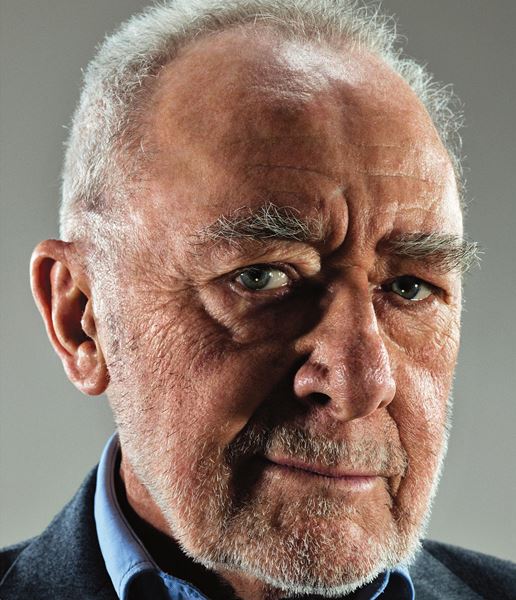 Gerhard Richter was born in 1932 in Dresden, Germany. Between 1952 and 1957, he studied art at the Kunstakademie, Dresden. The artist then moved to Düsseldorf, where he worked as a photo-laboratory technician. From 1961 to 1964, Richter studied at the Staatliche Kunstakademie Düsseldorf under Karl Otto Götz.

Richter’s first solo show was held at the Möbelhaus Berges, Düsseldorf, in 1963. Here the artist introduced his photo-painting style, in which he employed his own photographs of landscapes, portraits, and still lifes as a basis for his paintings. The artist blurred the depicted subjects or objects, deviating from traditional figurative painting in order to distinguish painting from photography. In 1967, Richter won the Junger Westen art prize from the city of Recklinghausen, Germany. It was at this time that the artist began his “Constructive” phase, which included the Color Charts, Inpaintings, Gray Paintings, and Forty-eight Portraits, as well as his work with mirrors. In 1972, Richter’s work was chosen to represent Germany at the Venice Biennale. That same year, he participated in Documenta 5 in Kassel, where he showed again in 1977, 1982, 1987, 1992, and 1997. The artist gained recognition in the United States in 1973 with a show at the Reinhard Onnasch Gallery in New York. In 1976, his first retrospective took place at the Kunsthalle Bremen and covered works from 1962 to 1974. Richter had a major exhibition in 1978 at the Stedelijk Van Abbemuseum, Eindhoven, entitled Abstract Paintings, which traveled to the Whitechapel Art Gallery, London, in 1979. Ever since, Richter has simultaneously produced abstract and photorealistic painted works, as well as photographs and glass pieces, thus undermining the concept of the artist’s obligation to maintain a single cohesive style.

Richter was awarded the Arnold-Bode-Preis at Documenta 7 (1982), Oskar Kokoschka Prize in Vienna (1985), Wolf Prize from the Wolf Foundation in Israel (1994) and Praemium Imperiale in Japan (1997). In 1988, the artist was given his first North American retrospective, which was co-organized by the Art Gallery of Ontario, Toronto, and the Museum of Contemporary Art, Chicago. The exhibition traveled to the Hirshhorn Museum and Sculpture Garden, Washington, D.C., and the San Francisco Museum of Modern Art. Since then, solo exhibitions of Richter’s work have also been organized by the Museum of Modern Art in San Francisco (1989), Tate Gallery in London (1991), Museo Nacional Centro de Arte Reina Sofía in Madrid (1994), Martin-Gropius-Bau in Berlin (1997), Astrup Fearnley Museet for Moderne Kunst in Oslo (1999), Deutsche Guggenheim in Berlin (2002), Museum of Modern Art in New York (2002), Hirshhorn Museum and Sculpture Garden in Washington, D.C. (2003), Kunst Museum Bonn (2004), National Museum of China in Beijing (2008), and National Portrait Gallery in London (2009). Recently, Richter’s work has also been featured at Dia Beacon (as a permanent installation since 2003), in Richter, Wiener, Whiteread at Guggenheim Bilbao (2004), and in the 52nd Venice Biennale (2007). From 1971–94, Richter was a professor at the Staatliche Kunstakademie Düsseldorf. Richter has lived and worked in Cologne since 1983, where the artist in 2007 designed a stained-glass window for the city’s famed cathedral. www.guggenheim.org/artwork/artist/gerhard-richter

Gerhard Richter has been married to Sabine Moritz-Richter since 1995. He was previously married to the artist, Isa Genzken (1982–1993) and before that to Ema Eufinger.